Sky Acres Winery has exclusively used GOfermentor technology since 2014. The advanced GOfermentor+SmartBarrel winemaking process enables us to safely make wines without any sulfite additions. These wines have enhanced color and a fresher, fruitier flavor.

Our wines won 8 medals in the 2021 San Francisco Chronicle competition, continuing a winning streak over 6 years. Sky Acres Merlot won a gold in the 2021 wine competition.

Of particular note is our Petite Syrah 2016, which won a bronze in 2018. The same wine won bronze again in 2020, showing the aging potential of our wines, even with no sulfites added. “Our GOfermentor+SmartBarrel made wines are pure – just grapes and yeast.” says Meera Singh, Winemaker, Sky Acres Winery. 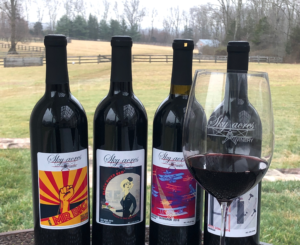 Evaluating nearly 6,700 wines from over 1,000 wineries for the 2021 San Francisco Chronicle Wine Competition. 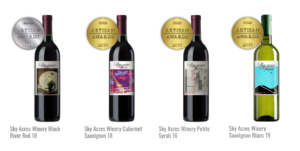 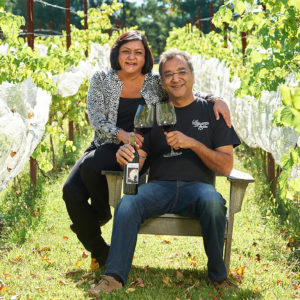 Taste the wines made by the innovative, patented, GOfermentor. Get a behind the scenes glimpse of winemaking process using the GOfermentor. Two demonstrations and tours of the winery at 3pm and 5pm. There is no handicap access.

The $15.00 charge to attend the Open House, wine glass and $5.00 towards a bottle of wine. Tickets will be available for pickup at the winery entrance. Click here to sign up. 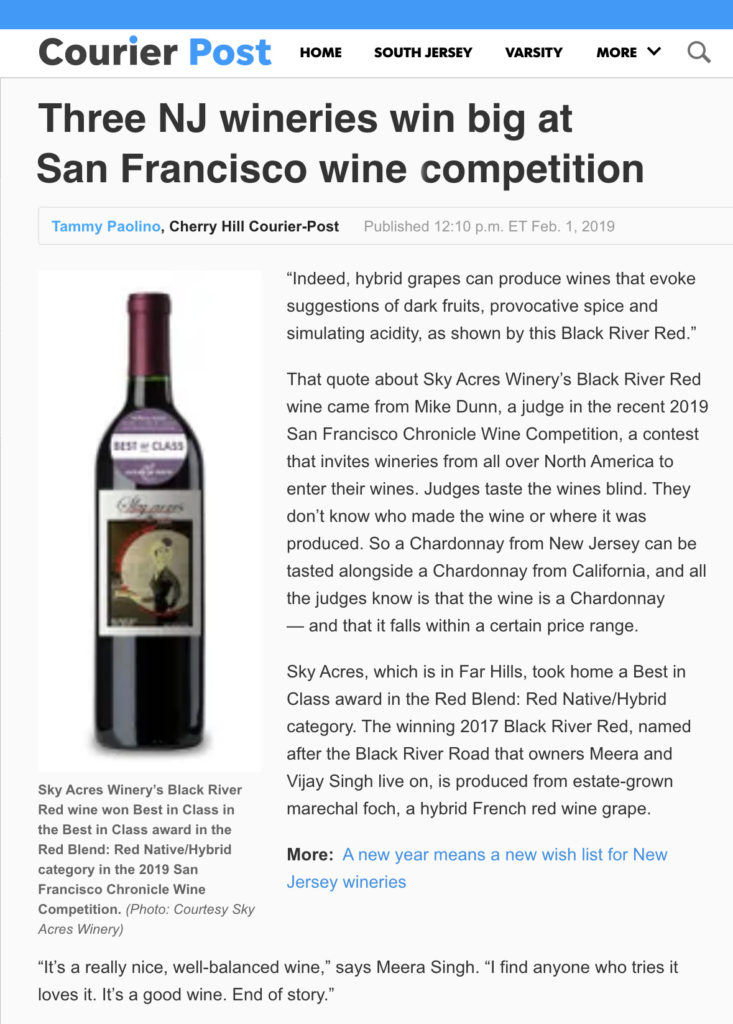 Sky Acres, which is in Far Hills, took home a Best in Class award in the Red Blend: Red Native/Hybrid category. The winning 2017 Black River Red, named after the Black River Road that owners Meera and Vijay Singh live on, is produced from estate-grown marechal foch, a hybrid French red wine grape. 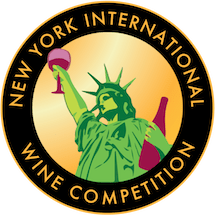 The New York International Wine Competition names Sky Acres Winery as ‘New Jersey Winery of the Year 2019 and 2018’. With New Jersey boasting over 50 wineries, we are honored to have received this distinction. This international competition received over 1,400 submissions from 24 countries. 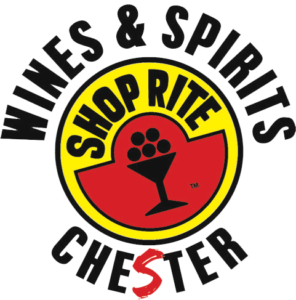 After receiving nearly 7,000 entries from 36 states across the country, the San Francisco Chronicle Wine Competition, the largest competition of American wines in the world, has once again narrowed thousands of wines down to an exclusive few, with our Cabernet Franc NJ 2016 winning Silver, our Black River Red 2016 winning Bronze and our Petite Syrah 2016 also winning Bronze. 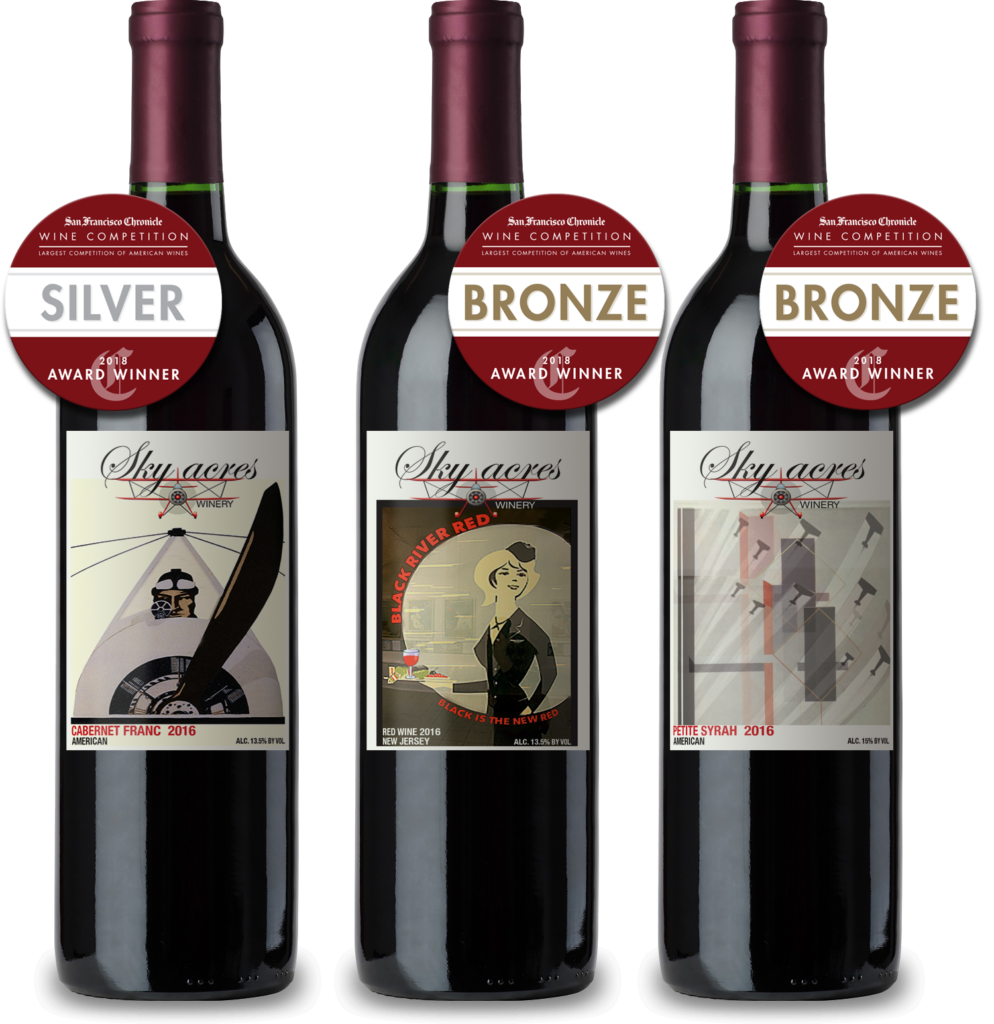 Our latest offering is a wonderful red that has been crafted to be the perfect compliment to Chinese food. If you have been unsure about what wine will compliment Chinese cuisine, look no further! 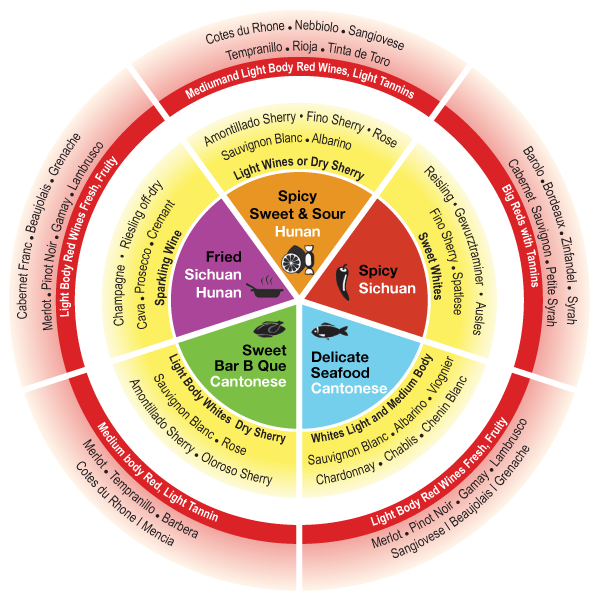 According to NY Times writer and wine enthusiast Adam Davidson, NJ is on its way to becoming the Napa Valley of the East Coast. FunNewJersey.com has put together the definitive guide to wine tasting in NJ complete with a NJ winery map.

After receiving 7,000 entries from 28 states across the country, the San Francisco Chronicle Wine Competition, hailed as the largest competition of American wines in the world, has once again successfully narrowed thousands of wines down to an exclusive few, with  our Cabernet Franc NJ 2015 winning Gold, our Black River Red 2015 winning Silver and our Petite Syrah 2015 winning the Bronze. 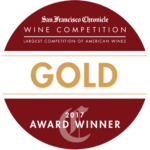 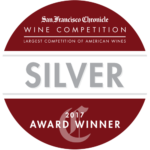 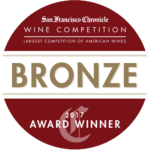 At the Harvest Challenge, judges taste wines with other wines of the same appellation. Thus, with cross-regional competition removed, the inherent quality of wines can be seen without the influences that sometimes eclipse even a wine of very high quality.

We are pleased to announce that Sky Acres Winery won two awards at the prestigious Finger Lakes International Wine Competition. Our acclaimed Petite Syrah 2014, and our Black River Red both took home Silver Medals. There were over 3,824 entries. 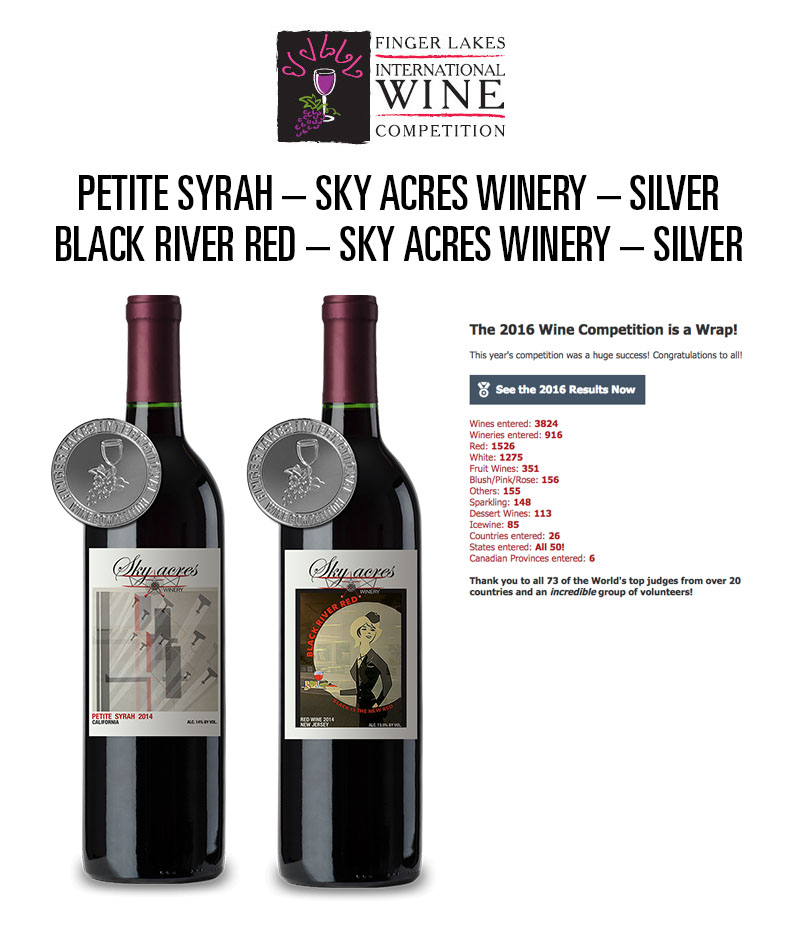 We are happy to announce that we won two awards at the prestigious San Francisco Chronicle wine contest. Our acclaimed Petite Syrah 2014 took the bronze in the under $ 24.95 category. Not an insignificant achievement for a wine made in NJ in our first year of production! There were over 7100 entries, including thousands from Napa, Washington, and other well know appellations.
We also won best-of-class gold for our wine label series. 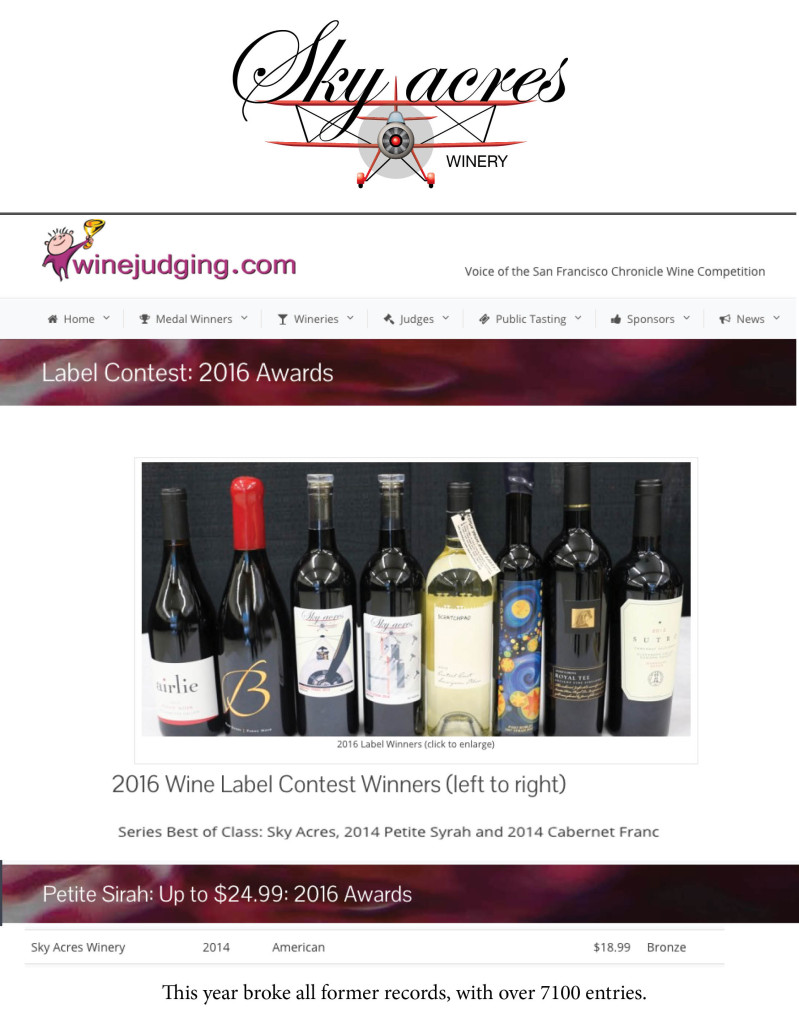 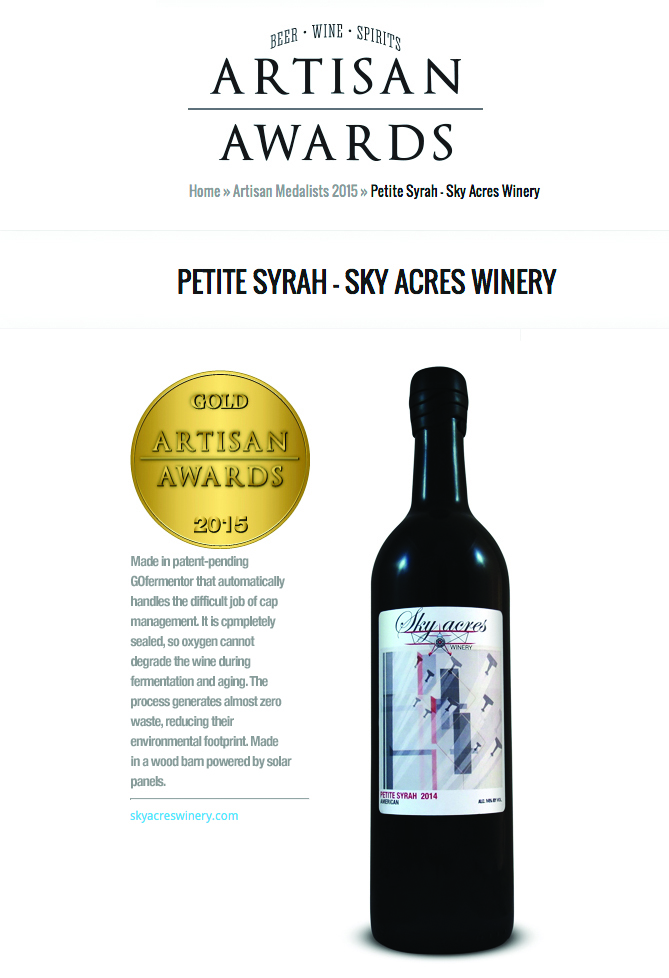 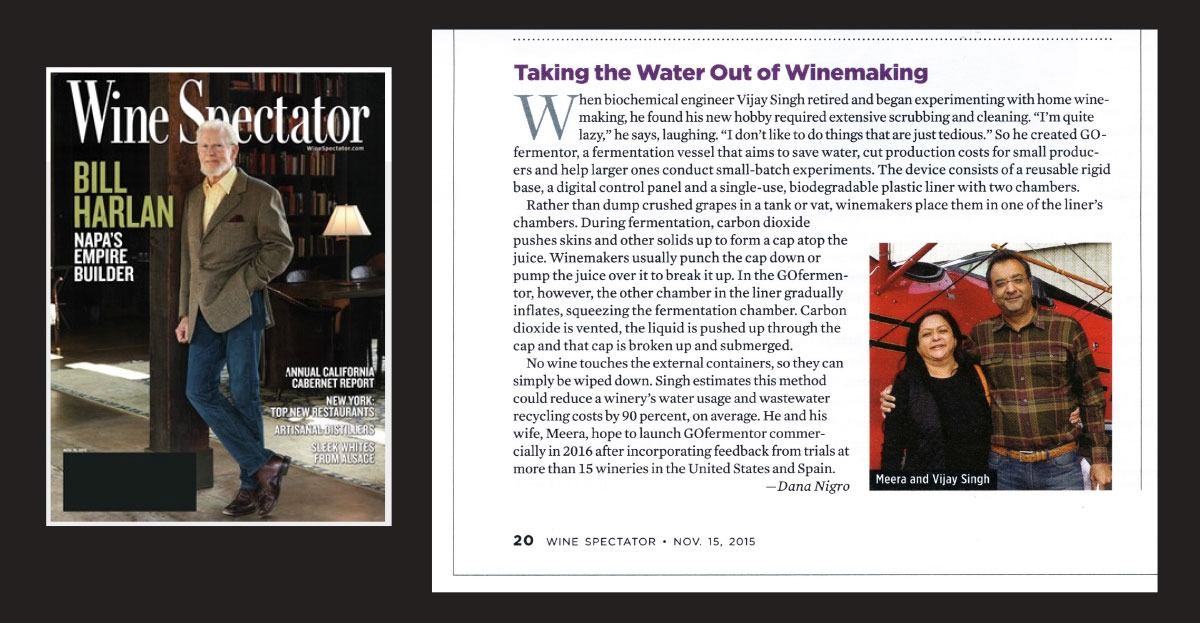 Taking the Water Out of Winemaking 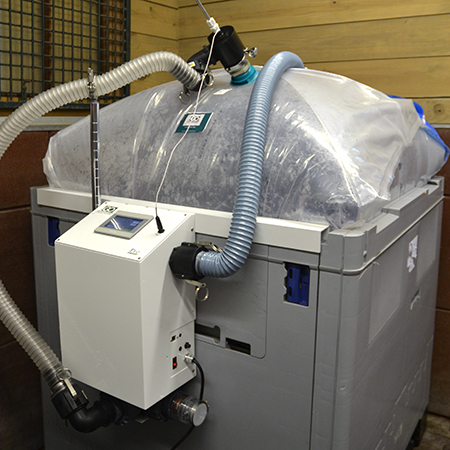 Not your father’s fermentor: This new device, in which fermentation is conducted inside a medical-grade plastic liner, can be installed in a small space and requires minimal cleaning.

A biochemical engineer by training, Vijay Singh spent decades working with pharmaceutical industry bioreactors in New Jersey. When he retired early, he decided to experiment with home winemaking. He quickly learned that winemaking requires extensive manual labor, scrubbing and washing. Quality wine demands spotless tanks, pumps, hoses and floors, and all of that demands a lot of water.

“I’m quite lazy. I don’t like to do things that are just tedious,” said Singh, laughing. He asked himself: What if a winery could reduce the time and effort devoted to those tasks—and conserve water simultaneously?

His answer has led to a new product, in trial this harvest at more than 15 wineries in the United States and Spain. Called GOfermentor, it involves fermenting wine in a disposable plastic bag. The device aims to make it easier for small winemakers to get started and help large producers make small lots, while dramatically cutting back water use in the process.

One of the more than 20 patents Singh developed during his career is the Wave Bioreactor, which replaced hard-to-sterilize tanks and stirrers for mixing vaccines, antibodies and other cell cultures with disposable plastic bags on rocking platforms.

GOfermentor builds on that idea of trading vats for portable and disposable components. The device consists of a reusable rigid base; a control panel for monitoring temperatures, logging data and scheduling punch-downs; and a single-use, flexible, biodegradable plastic liner for either a 1-ton or 2-ton batch.

The liner has two completely separate chambers—after harvest, rather than dumping crushed grapes into a vat, the winemaker places them into a chemically inert chamber. During red wine fermentation, carbon dioxide pushes skins and other solids up to form a cap atop the juice. Winemakers usually punch the cap down or pump the juice over the cap to break it up and submerge the solids.

To replace manual punch-downs, the GOfermentor gradually inflates the liner’s second chamber, a blue nylon bag. As it expands, the CO2 in the fermentation chamber is vented, the liquid is pushed up through the cap and that cap is squeezed, breaking it up. The bag is then deflated, and the chunks of wet skins settle back into the liquid. (See the animation below.)

The process—which can be prescheduled or started manually with a tap of the touchscreen—takes just a few minutes. “This system extracts more, so even if you have some marginal grapes, you can get more color and flavor out of them,” said Singh. Using the same inflation technique, the GOfermentor can also serve as a bladder press for red and white wines, making that process cleaner and quicker.

No oxygen or potential contaminants touch the juice once fermentation is underway; even samples can be drawn without air contact. “With less oxidation, we can cut down on the need for sulfites,” noted Singh.

In turn, no wine touches the external containers, so they can simply be wiped down. Aside from a few hoses and pumps, water isn’t needed for a wash-down. Singh estimates this could reduce winery water usage costs—including wastewater treatment—by 90 percent, on average, along with cutting out cleaning chemicals.

The pomace left behind after fermentation can be removed and used for fertilizer, while the disposable liner breaks down. “If you leave it in the sun for a week, it disintegrates into tiny pieces,” said Singh.

Singh and his wife, Meera, who helps him make the wines at their experimental, sustainable Sky Acres Winery in New Jersey, hope to launch GOfermentor commercially in January 2016, after incorporating feedback from the trials, which include small- and medium-size wineries in both cool- and warm-climate regions making white, red and fortified wines.

The control panel and other reusable components will cost between $3,000 to $5,000, plus $200 to $250 for each liner. Wineries can rent the GOfermentor bases for $1 a day for two or more months during harvest, then return them, so they don’t have to store fermentation tanks year-round.

“It could be a real cost saver, because you don’t have to do punch-downs,” said Scott Osborn, president and co-owner of Fox Run in New York’s Finger Lakes. (He had planned on doing a trial until his team discovered that a valve on the test unit did not fit the winery’s hoses, but he was still enthusiastic.) “We like to do small lots,” he said. “We’ll [ferment in] picking bins, which hold about 1 ton of grapes. When you do 15 or 20 1-ton bins, those punch-downs get old real quick.”

In Napa Valley, Clos Pegase winemaker Richard Sowalsky is testing GOfermentor with some estate Zinfandel. “A number of top producers look to diversify fermentation styles to gain complexity,” he explained. “I could foresee it as a great tool to augment more traditional fermentation, adding new nuances for blending.”

At The Wine Foundry, a nearly 30,000-case custom-crush and custom winery in Napa, general manager Steve Ryan was attracted most by GOfermentor’s potential environmental benefits and the ability to control oxygen exposure, seeing it as useful for smaller projects, blending lots and trials on new potential vineyard sources. “Honestly, we geek out a little on science,” he said, “so it’s kind of a cool thing to try.”

“My real interest is to make better quality,” said Singh, who hopes GOfermentor will help smaller winemakers get started thanks to lower costs and a system that can be quickly set up and broken down. “Maybe this will spur a whole new set of little guys making interesting wines.” 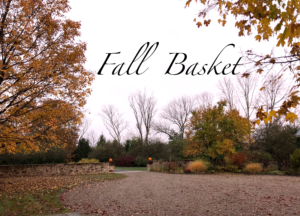 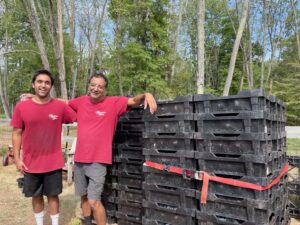 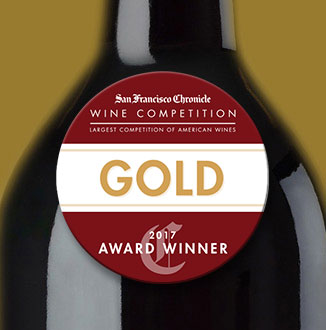 Read the story in winespectator.com. Waterless winery now a reality 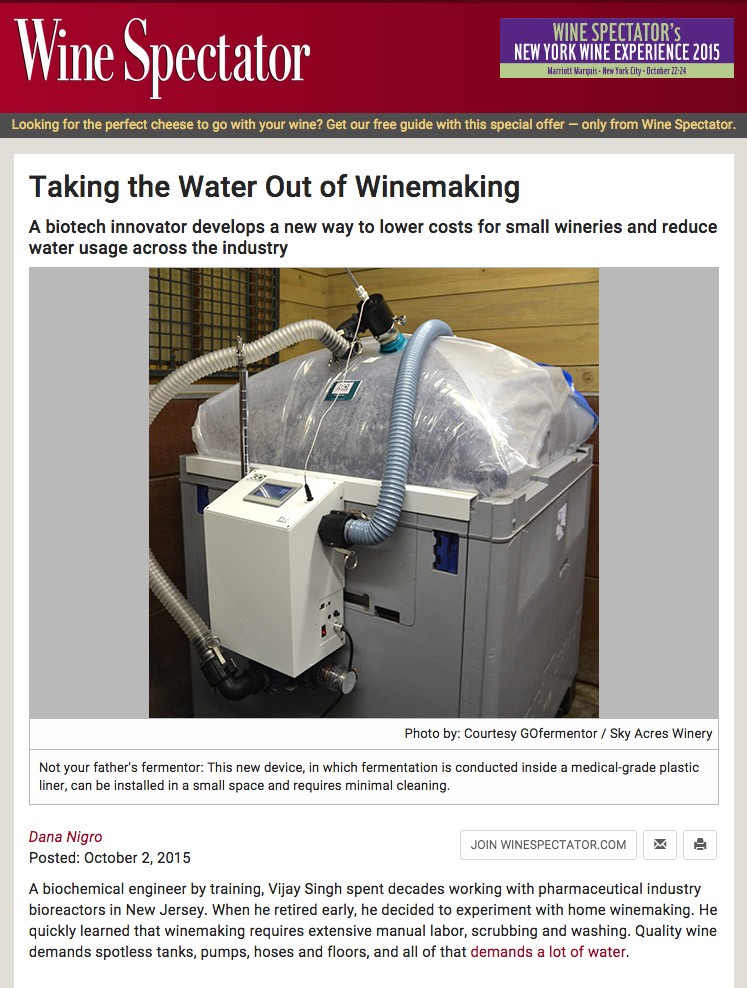 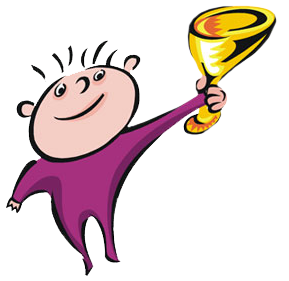 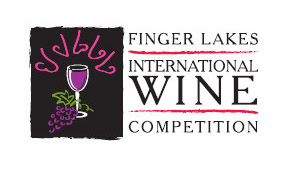 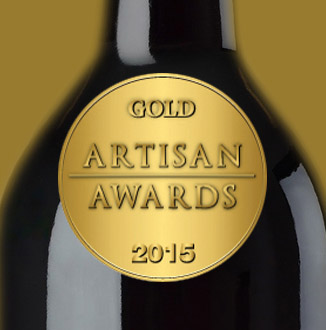